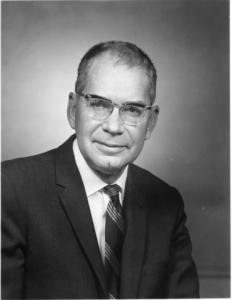 "Harvey hired a young researcher, Russell Sinnhuber, who was to become a leader in the field.  From 1942-1957, Sinnhuber made major advances in food processing technology at the Seafoods Laboratory and after that from the main OSU campus.  Even today, Sinnhuber's paper on rancidity testing is the most cited paper in the food technology field (Food Technology, January 1997).  The fledling laboratory needed this caliber of research to justify its existence and attract funding support.  Russell Sinnhuber was the lodestar for research and graduation education at the Laboratory"

"While at OSU he became internationally known for his research contributions in advancing the biomedical field, publishing more than 100 research papers in the areas of food science and toxicology. In 1958, with T.C. Yu, he developed the 2-Thiobarbituric (TBA) method for measurement of rancidity in fishery products. This paper was recently found to be one of the most frequently quoted publications from OSU in the scientific literature. From his research in the 1960s, he determined that a potent chemical carcinogen, aflatoxin, found in moldy cottonseed meal, caused liver cancer in hatchery-reared rainbow trout, in levels as low as 1 part per billion. He recognized that the trout's extreme sensitivity to aflatoxin made it an excellent model for cancer research. In 1965, he established the OSU Food Nutrition and Toxicology Laboratory, located south of Corvallis. This facility is the only trout hatchery in the world devoted to cancer research. Later he developed a method to measure the levels of aflatoxin in human foods as well as animal foods. This method is still widely used today."

"In 1966, he received the United States Department of the Interior Conservation Service Award for his work with Duncan Law at the Astoria Seafoods Laboratory in developing the Oregon Moist Pellet that still provides the major source of fish hatchery food. This diet was responsible for insuring successful salmon runs for many years in the Pacific Northwest and also in the Great Lakes region.

He retired from OSU as emeritus professor in 1981"